This is a story that has its beginning at the very end; a funeral. My grandfather’s funeral to be exact. He was 84 and I was prepared for this day. But he did not die of natural causes or in a time of normalcy. He died from a hospital mistake, made during a small routine operation at a big Norwegian hospital. The operation occurred, only two days before all national hospitals postponed or cancelled all non-life threatening medicine, due to the COVID-19 outbreak.

His body fought sepsis for 11 days, before his organs gave in. One by one. The doctors disconnect him from machines. My mother called that day and described an orange frail body, fighting to breath. My grandmother went into a blank, teary stare when she explained that it was like he tried to cling to life with all he had. With every wheezing breath. The hospital where a ghost town at that point. Mom tells of guards stationed outside all the hospitals entrances asking questions every time they came and went. She remembered the halls and cafeteria left by other humans. My grandmother has problems distinguishing between days in the hopital, she saw her life partner of almost 65 years slowly wither away in the COVID empty halls. My grandfather took his last breath the morning of march the 21st in the year of Corona.

On his death day, I was in quarantine 8 hours away from my home town. Confined to my home because of an actioned filled trip to Spain a week prior. I could as well have been on the other side of the world. Will I even be able to come to the funeral? 8 more days of physical confinement. The walls of my apartment stated to feel more less like a refuge, more like a prison. My grandmother called me, her voice beyond exhausted. She described the funeral arrangements. All planning occurred over the phone, no face to face contact. She understood why this had to be done. Physical distance, even in grief. In her mind the hole experience felt impersonal and devoid of genuine feeling. They decided on a casket burial, since his COVID-19 test came back negative in the end, they had that choice. The funeral was set to the 1st of April, without any gathering after the church funereal. This was two days after my quarantine was over. I felt a wave of relief. I was lucky, this was more than one could hope for in the year of Corona.

On the train station in my hometown, Grandma greeted me. Between us were a big loss and two meters of social distance. No hugs, no physical contact. I thought back to my travels on a packed SAS-plane. Contaminations rules seemed not to matter in airspace, my face only half an arm’s length away from my fellow passengers. What if I was infected my 82-year-old grandmother now? The fright send cold sweat down my back. I could not hug her, even if it felt all kinds of wrong.

We sat quietly in the house on the mountain, with the big window, overlooking the fjord - “I dread tomorrow” my grandmother suddenly expressed. Rubbing her face, trying to hide her tears. When I asked why, she couldn’t properly explain. She had chased sleep for almost two weeks. I started dinner, while she ironed our funeral clothing. Time flowed in a gluey, syrup like rhythm. Most signs of my grandfather were cleaned out of the house. The only traces I could see, was his soap in the shower and the fake rubber “Crockes” he used to wear in the garden. My grandmother had tidied him out of the house, as part of her grief proses. The only part that stood intact, was the tool-shed by the front door. In there he had collected almost five of every tool. It was filled to the brim, with bikes, a snowblower, glasses from the 70s, his Hurtigruta cap and old wooded skis. My grandmother was never allowed to clean in there, his pace. Now she did not want to go in. The tool-shed stood as a mausoleum for him.

We were dressed two hours before pickup for the funeral, but when we stood in front of the church, we had forgotten the memorial picture that should be placed by the entrance. My mother speeded back to pick it up. While we were waiting, the churchwarden explained the COVID-19 restrictions in the church; only three people in every other church bench, maximum 50 in attendance and anti-bacterial in the entrance. We could not lower his casket down into the ground at the very end. There were too many people that had touched the ropes used for this. My grandmother, in her dark sunglasses, greeted everyone by holding her gloved hand over her heart. – “I wish I could hug you all, but I will do this”. We did not expect many people in the church, we were right. People where scarred. After the service the small gathering transported his casket to his final resting place. The priest threw dirt on the casket – “From earth you came, to earth you will return” he walked away, the casket still on top of the earth. We lingered around the unfinished grave, in the cold April wind, with nowhere to go, searching for comfort in our isolated loss. 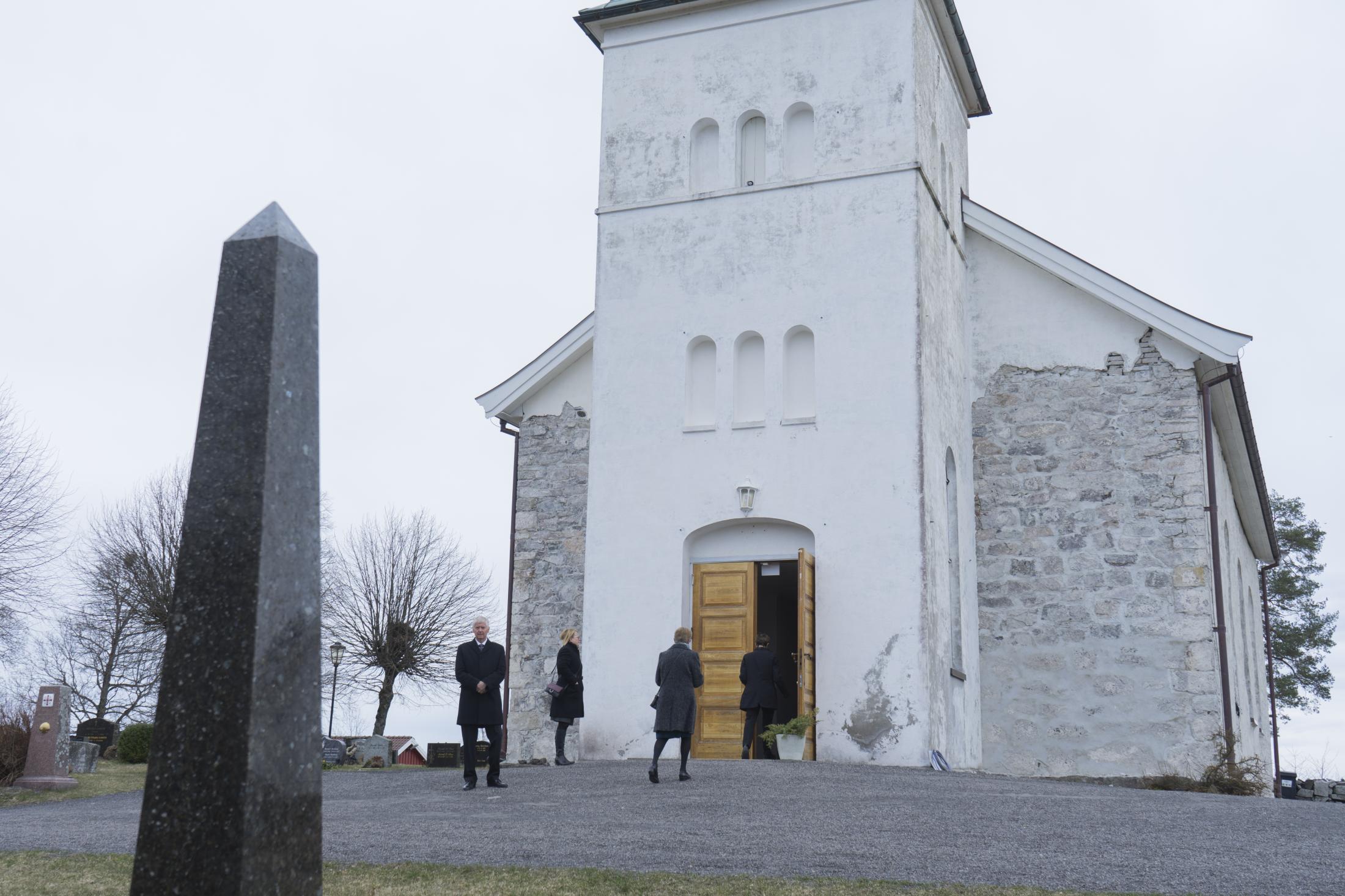 The churchwarden leads my Grandma and Aunt into the church, while Uncle lingers outside. 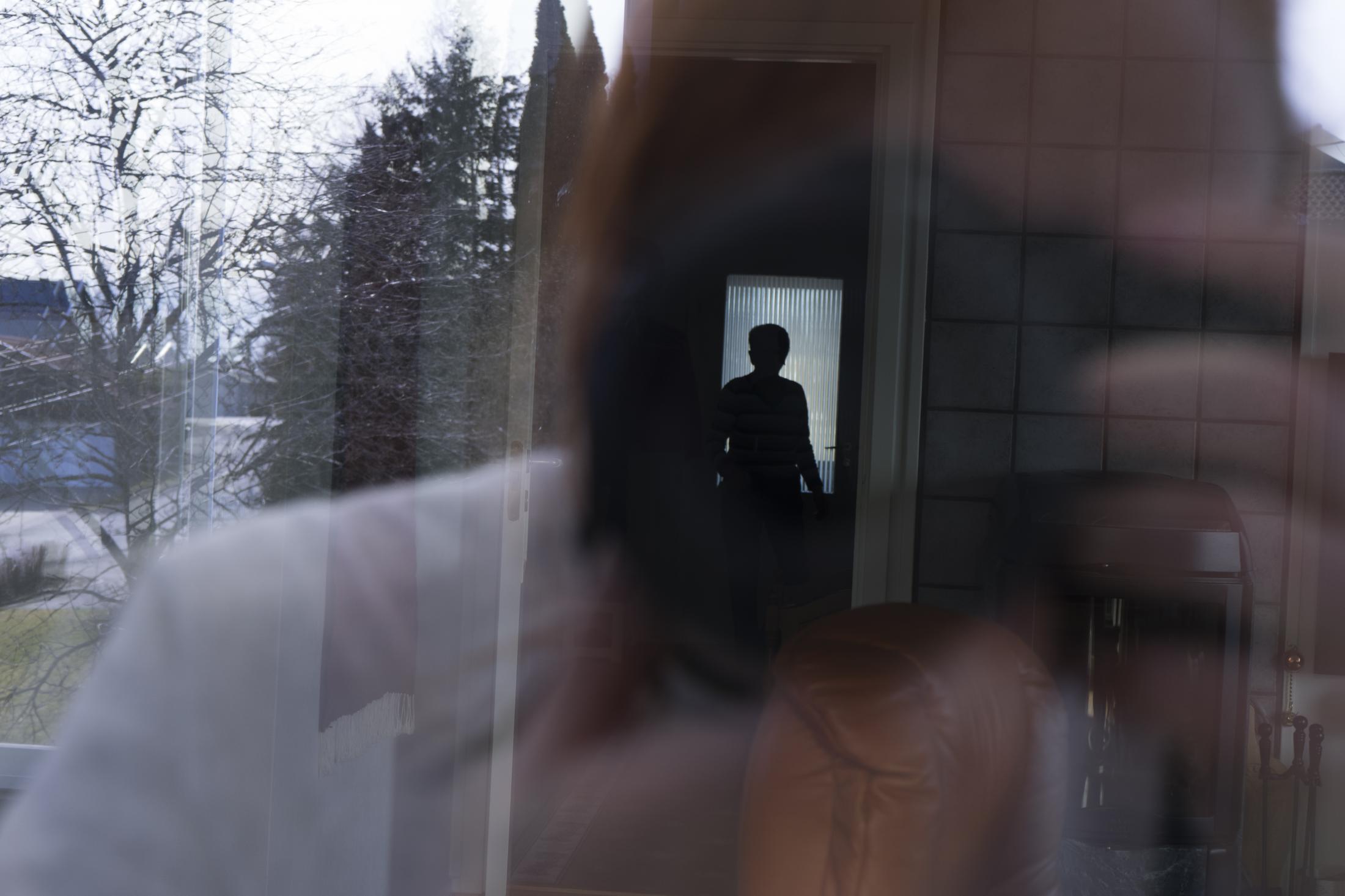 Grandma walking down the hallway one the morning after the funeral. She struggled with sleep every night. 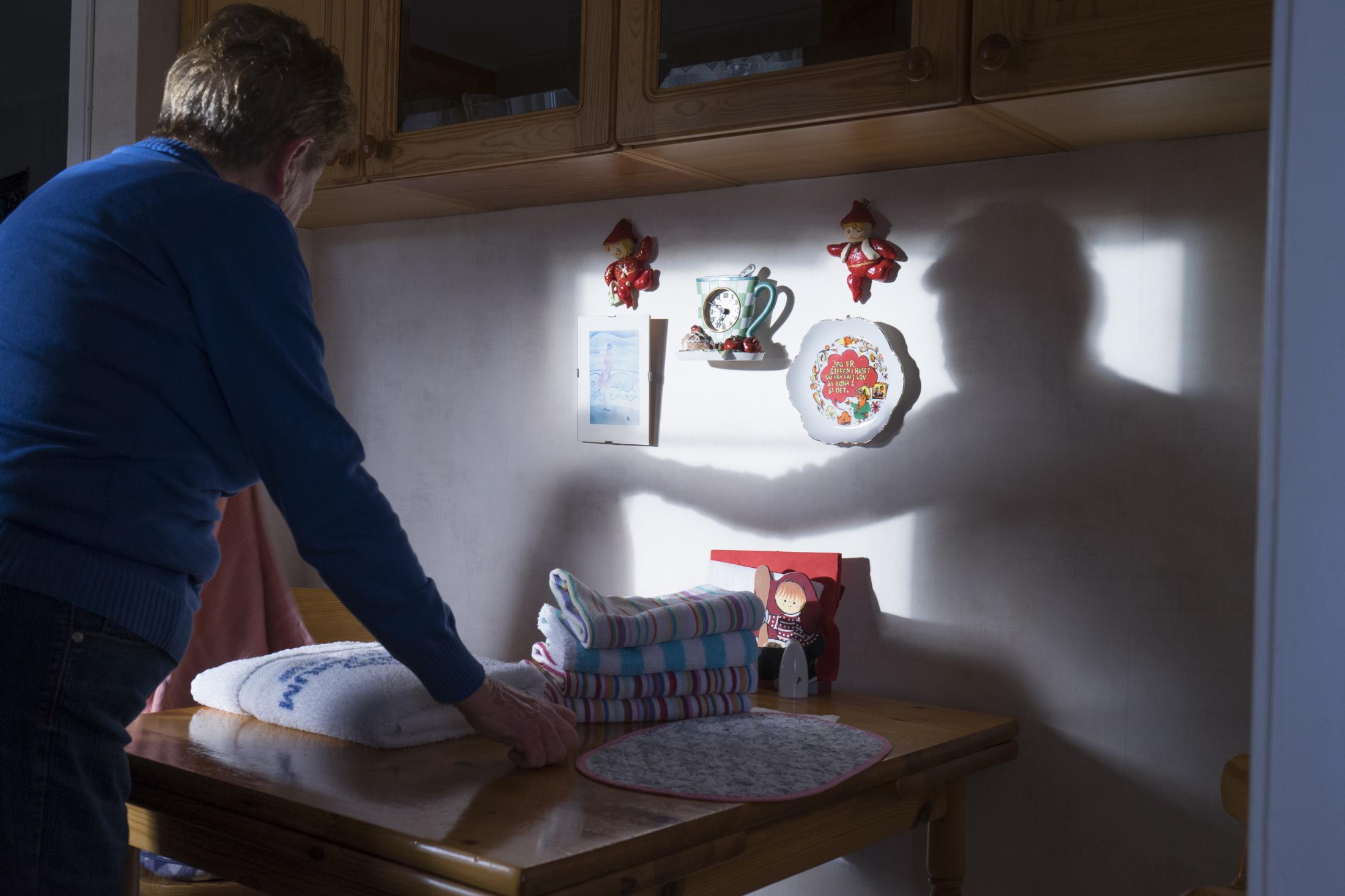 Grandma kept busy in the days after the funeral, she cleaned a lot. She did not say it to my face, but I think she was a bit worried because I were staying in her house, since I traveled there by plane. 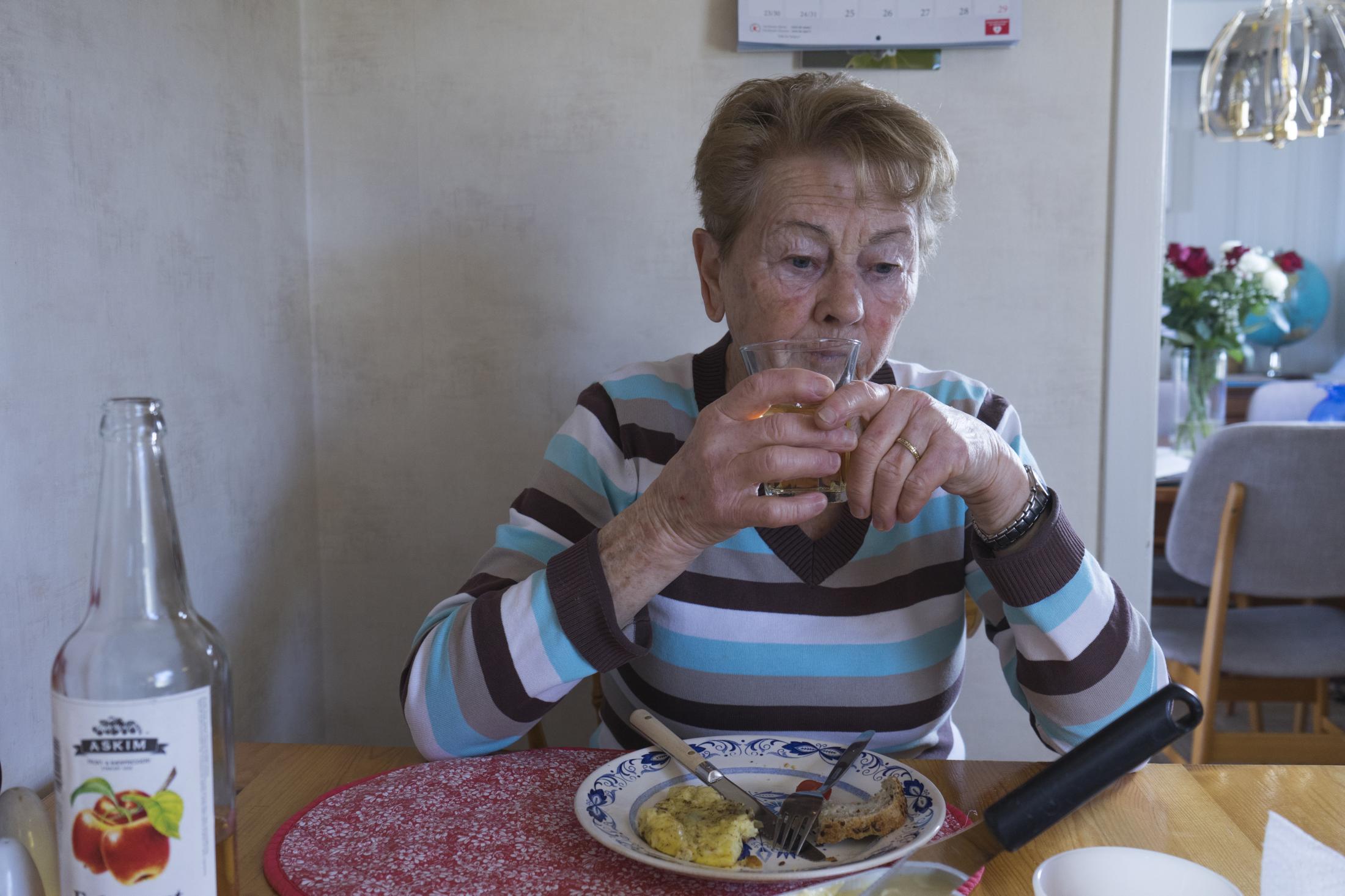 Together we are eating omelet for lunch one day after the funeral. She has never been a big eater, but after my Grandads death she skipped meals every day. I started cooking and helping her in the kitchen, it helped her eat more. I dreaded the day I had to leave, because I knew she would start skipping meals again. 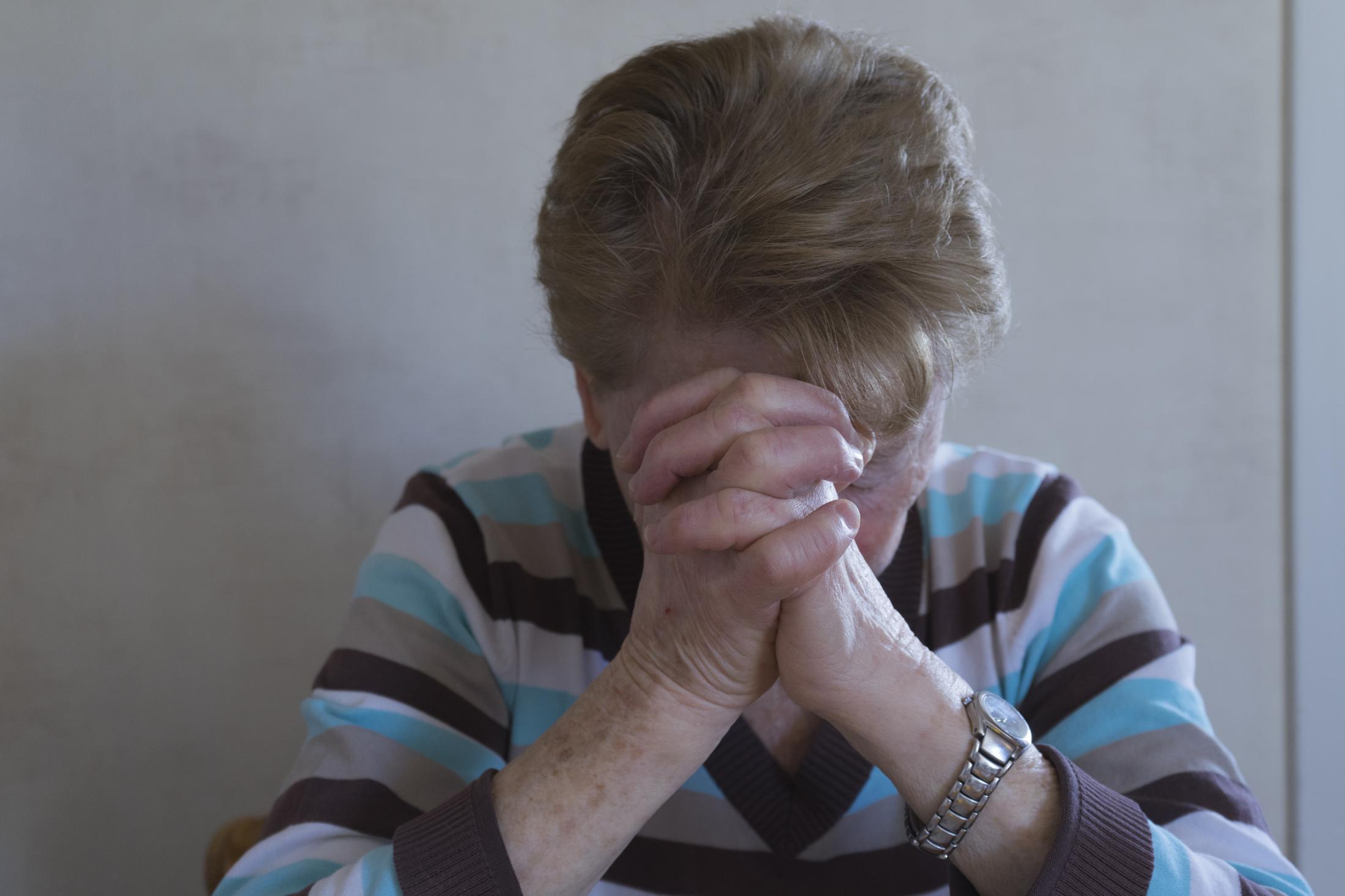 Grandma at the kitchen table after the omelet, we were talking about me leaving to go back home and she openly expressed she dreaded living alone in the big house. 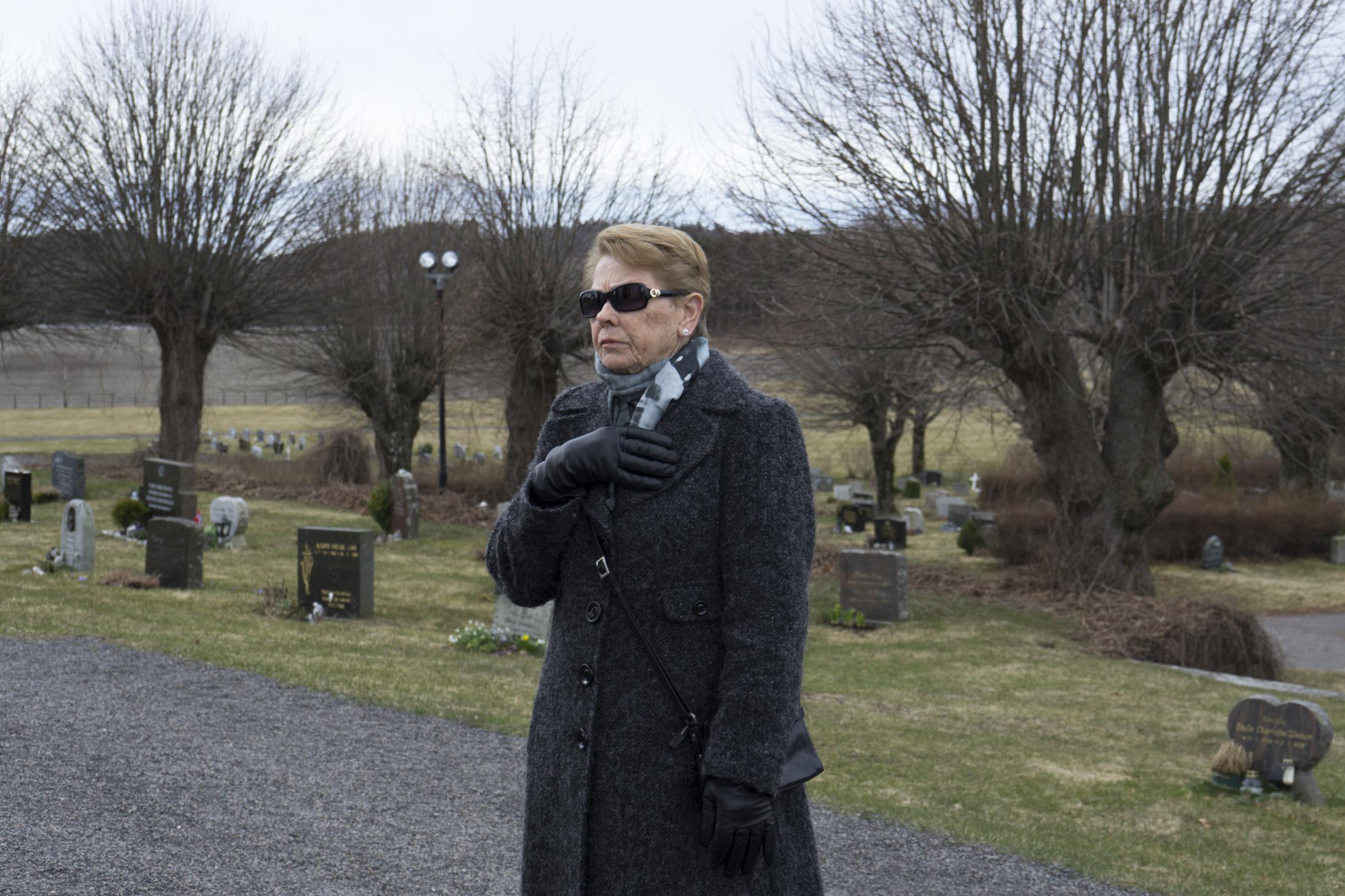 Grandma greeted the churchwarden when we arrived at the funeral. She used the hand over heart greeting and got frozen in this moment, while she listed to the churchwarden explain the COVID-19 contamination limitations in the church. 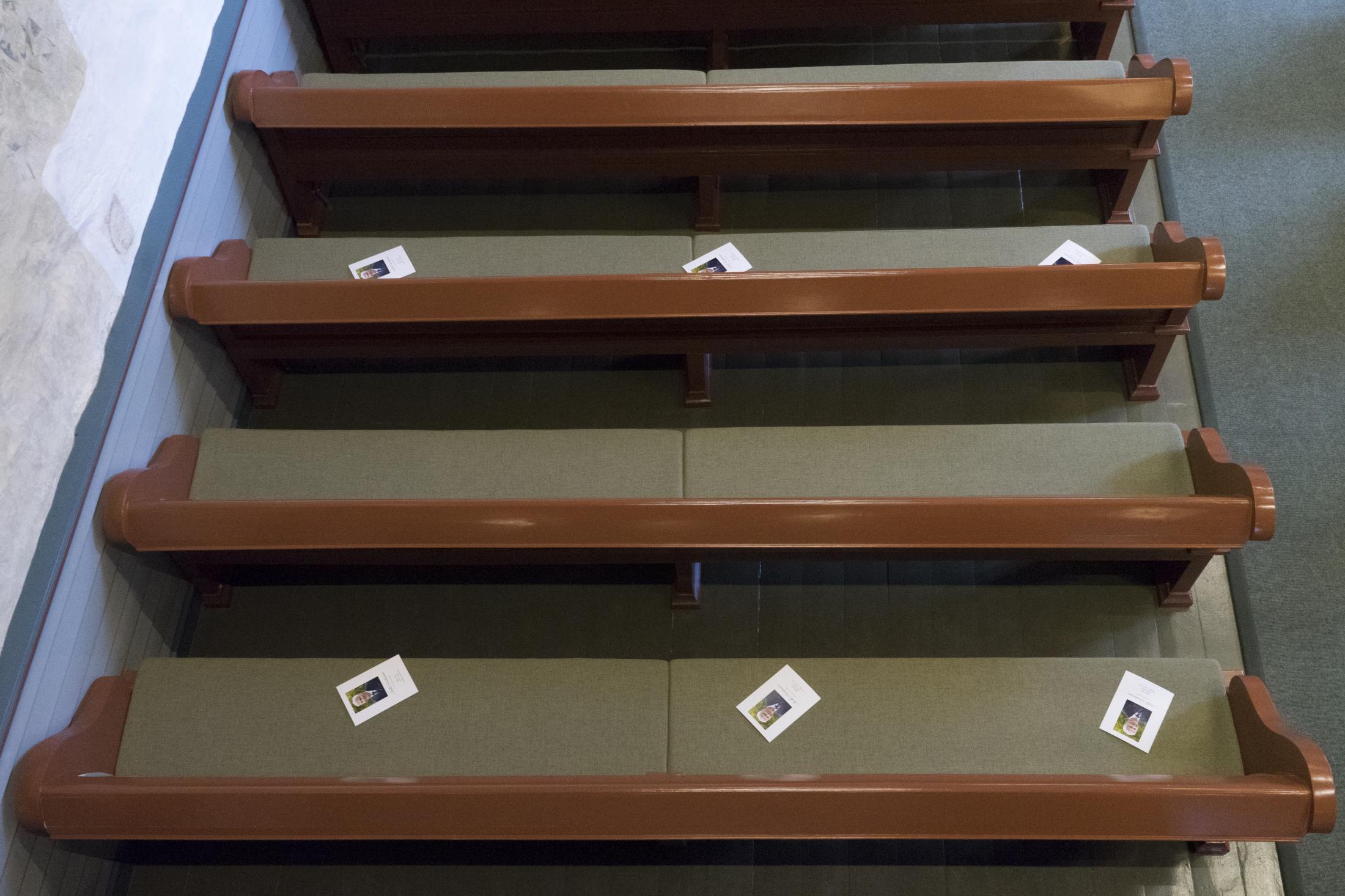 The memorial programs with my Grandpas picture on it, where spread out on every other church bench and placed two meters apart. To signalize where people could be seated during the funeral. 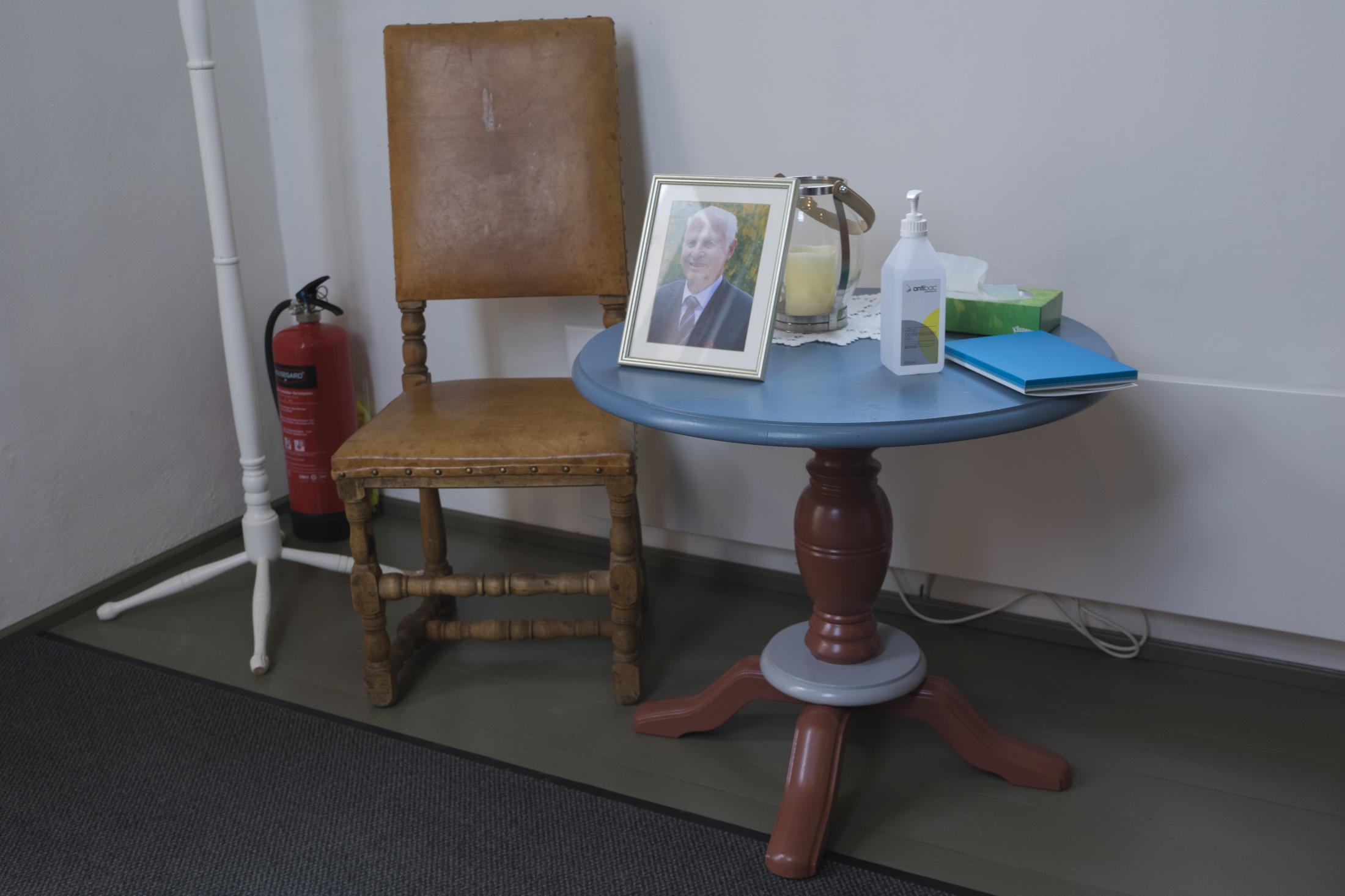 Grandpas memorial picture is placed on a small table at the entrance of the church. Beside it a full bottle of anti-bacterial gel. 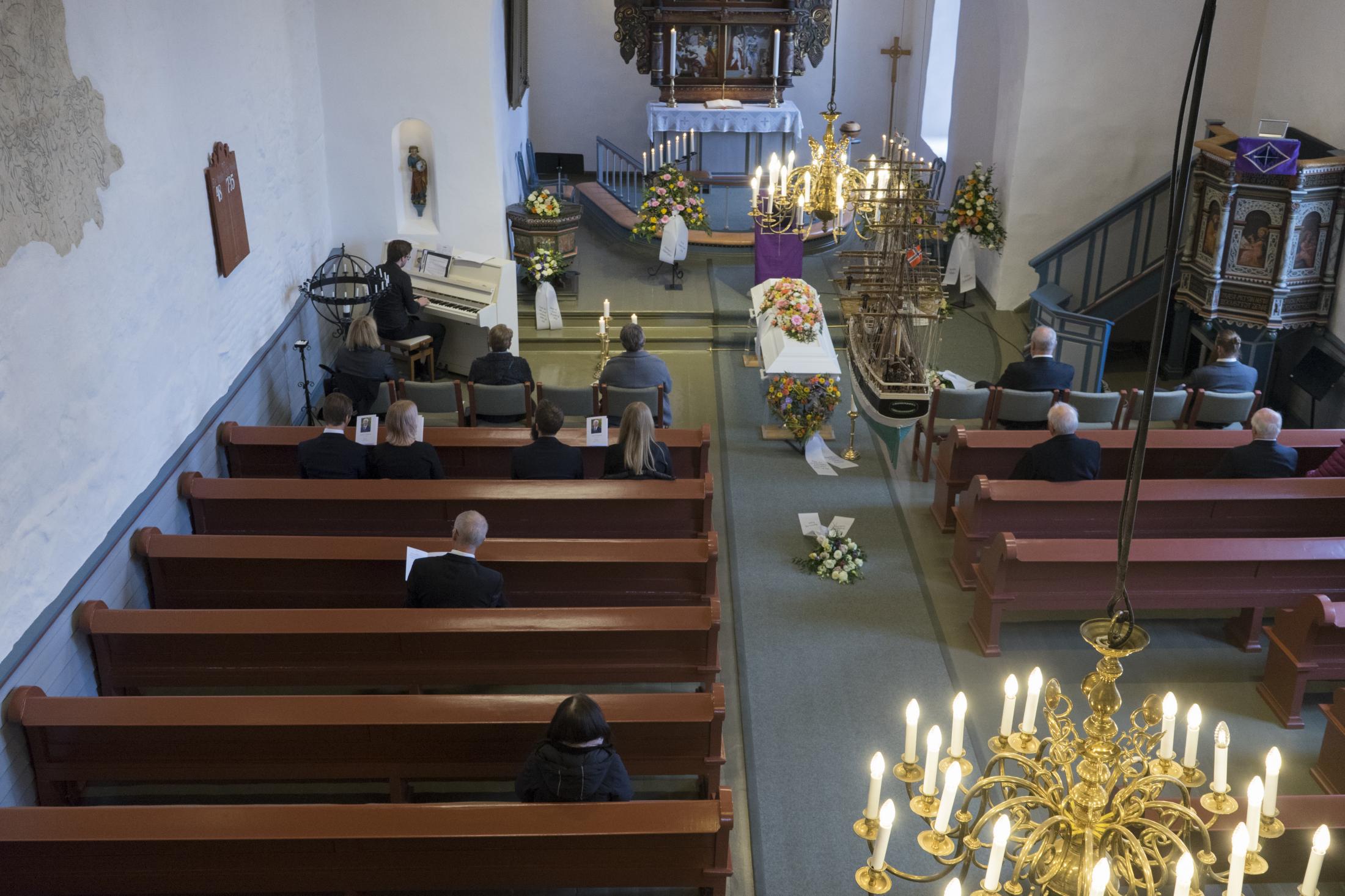 While waiting for the church bells to chime in the start of the funeral, the pianist plays calming tunes and the small gathering sit in silence. Few people showed up for my Grandpas funeral, even if he were a liked man in the community, people were scared and stayed home. 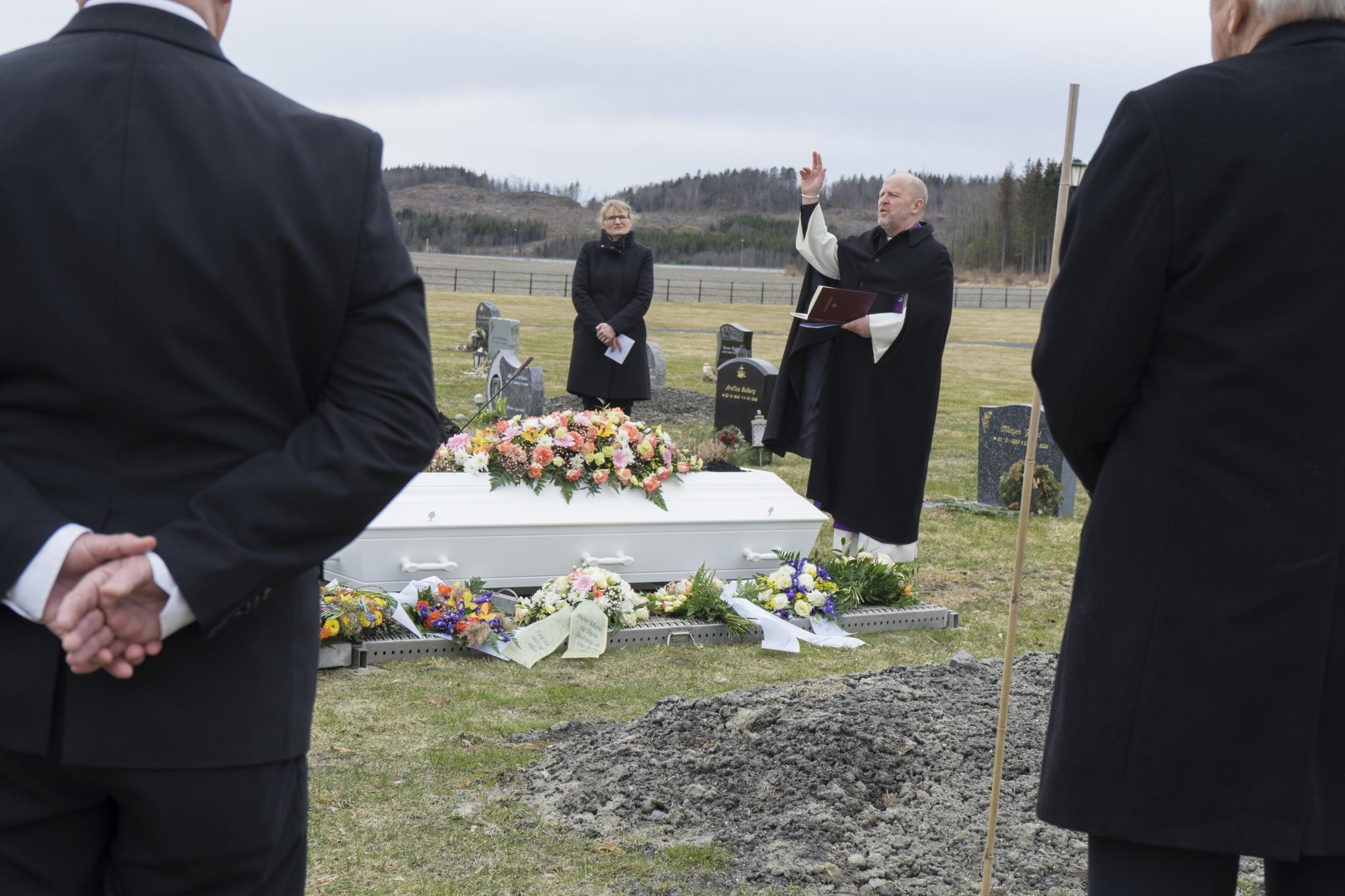 Before walking away, the priest makes the cross sign in the air as a mark of the end of the funeral. 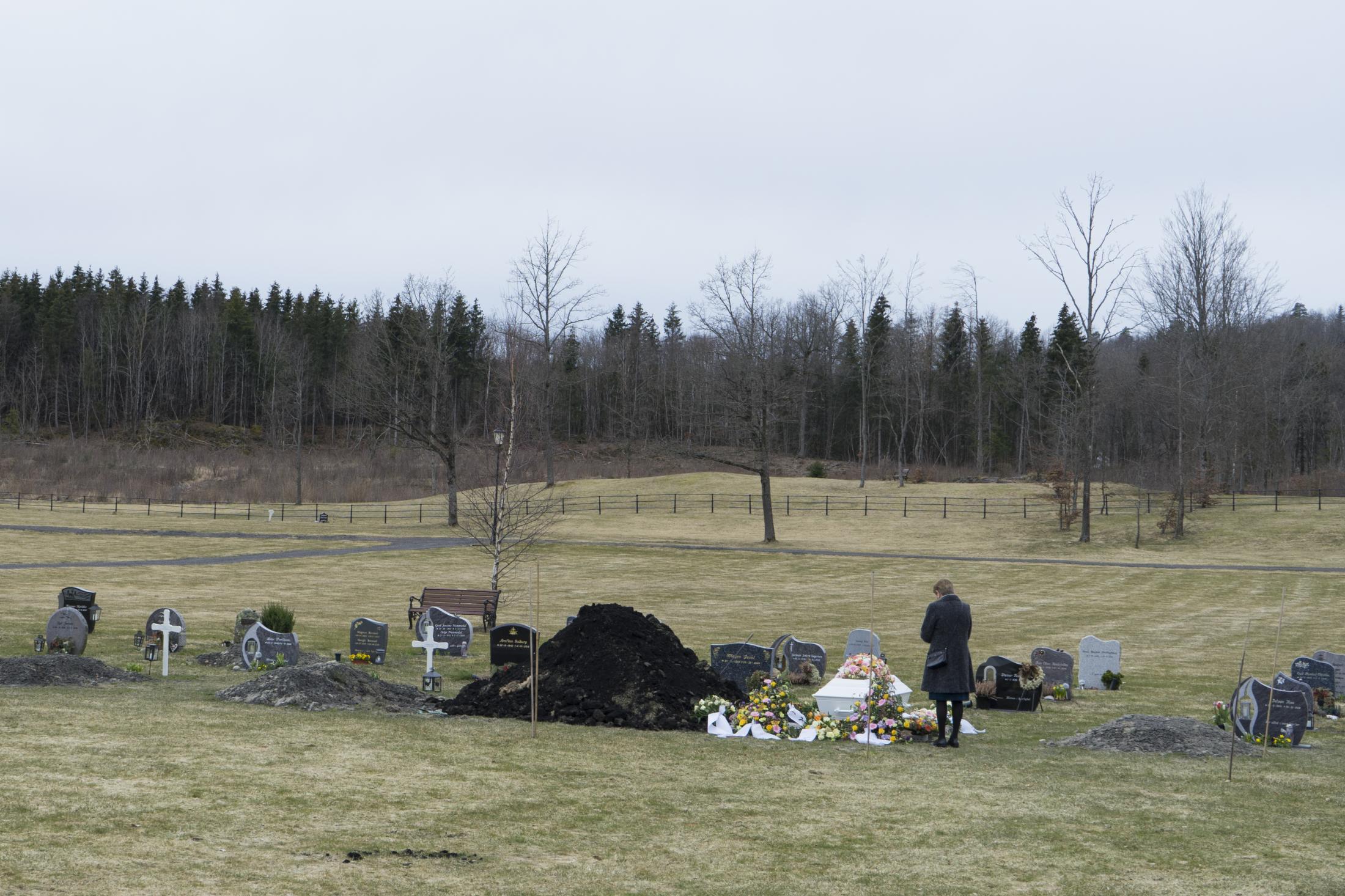 Grandma asked us all to go ahead so she could get a few minutes alone. She said her goodbyes by the unfinished grave and later confessed that she was glad the casket was not lowered in to the grave. That was the moment she had dreaded the most. 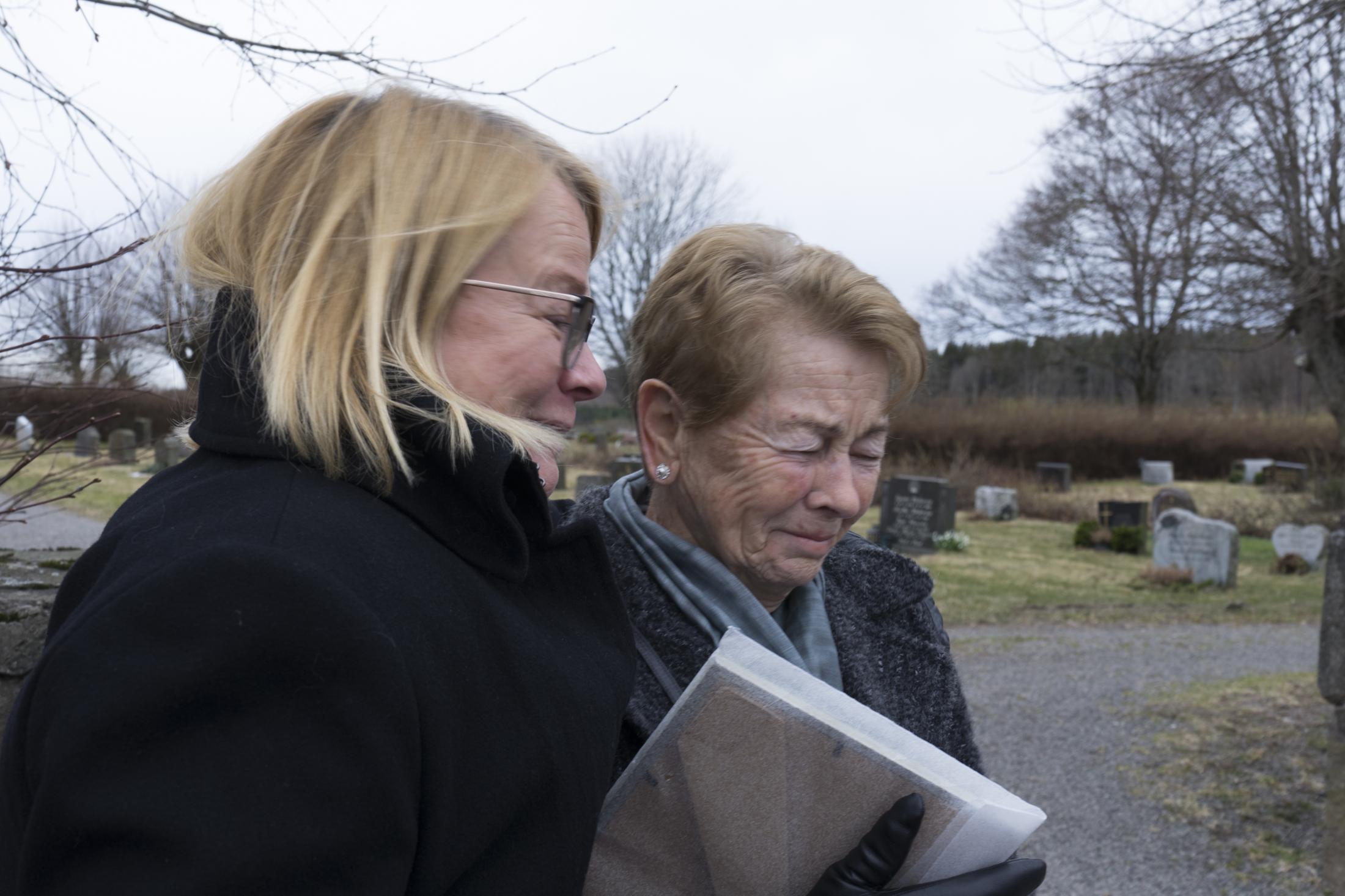 Auntie comforts Grandma at the end of the funeral. We made a joke that my Grandpa always used to tell about my Grandmas thin legs and everyone started laughing and crying, all at once. 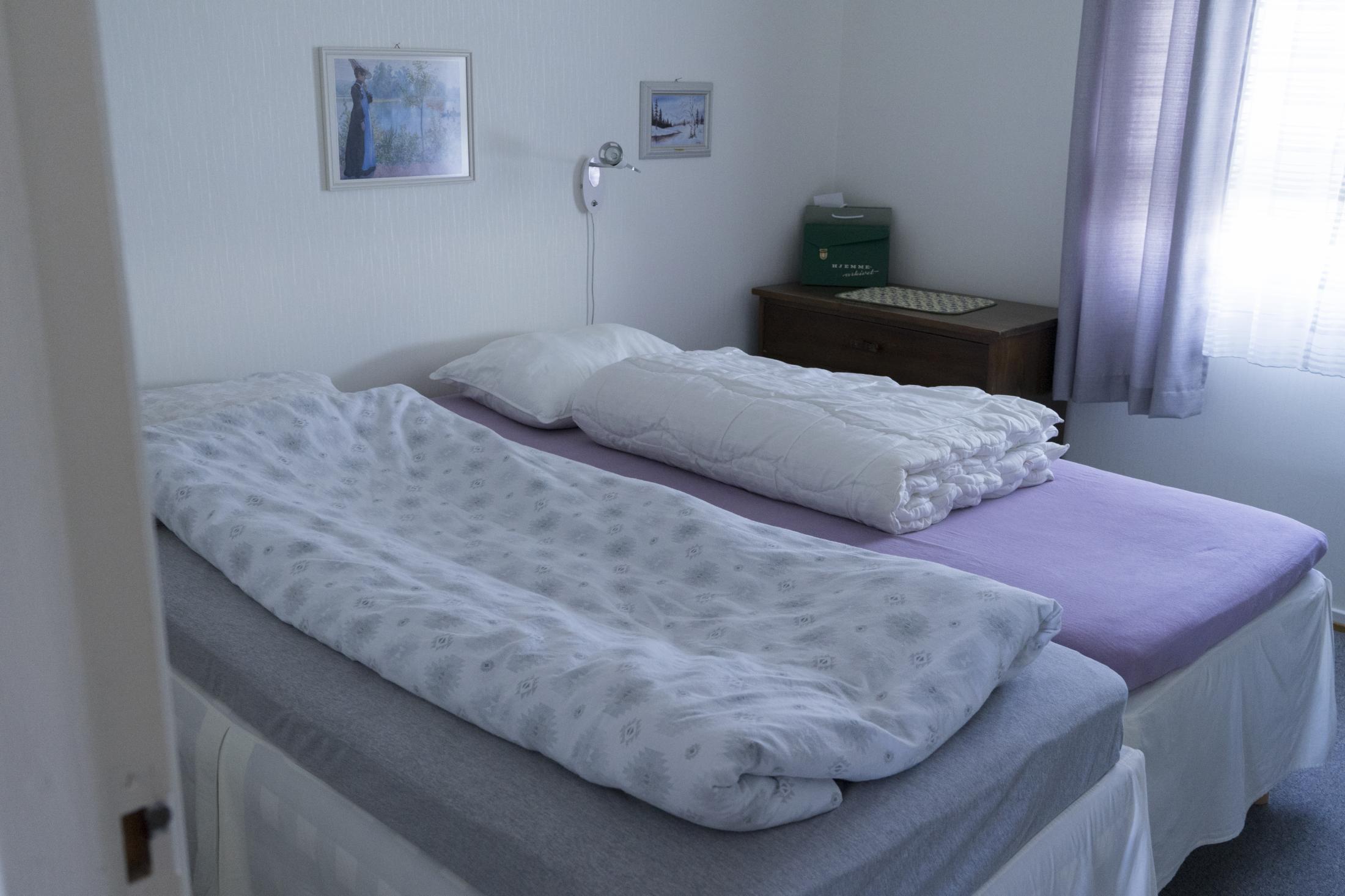 In their bedroom, there is remanence of my Grandfather. Grandma makes up her bed every morning and have not had the heart to remove the pillow and duvet from his bed. 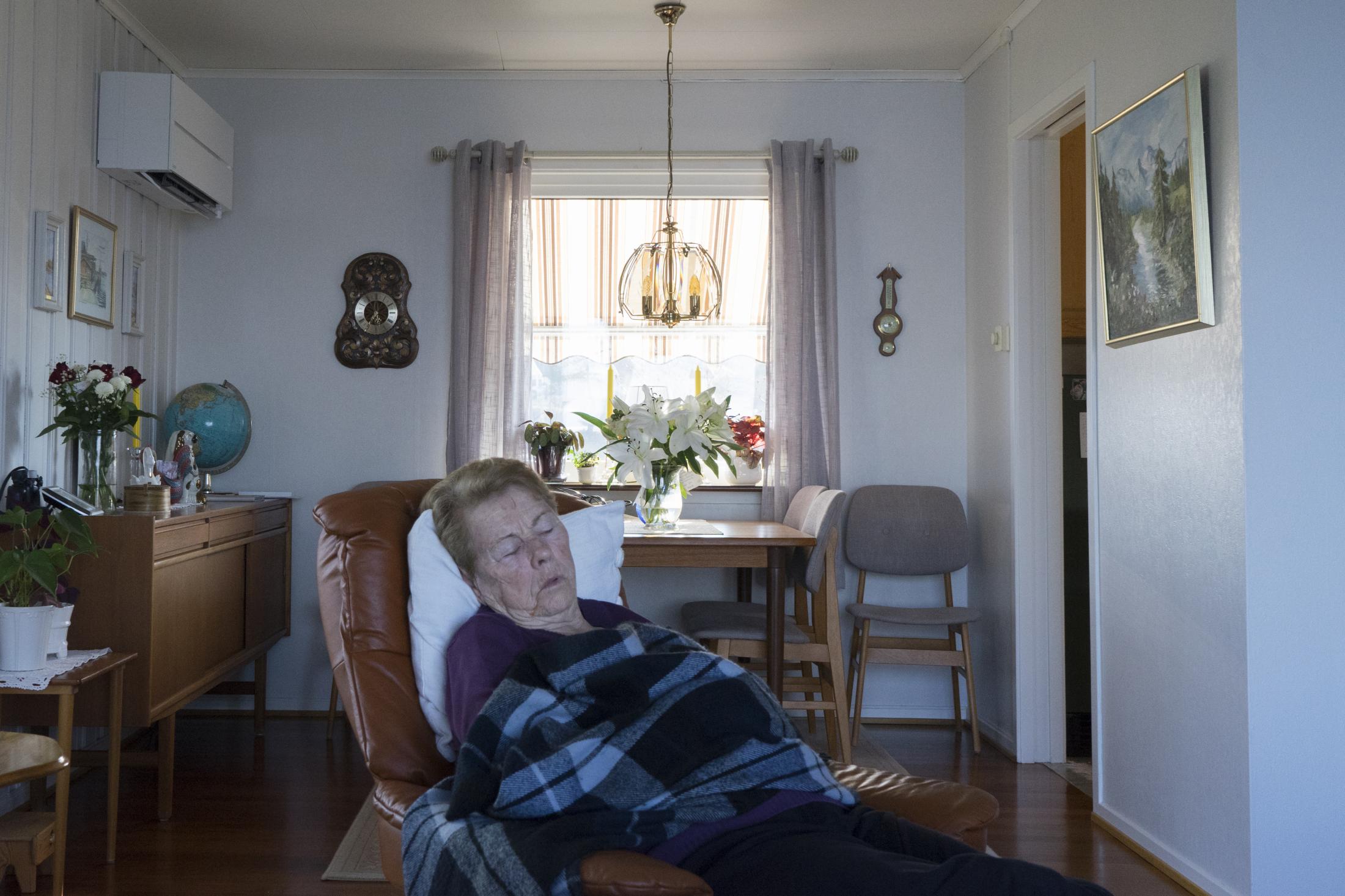 Grandma takes a nap after dinner. As long as I can remember, both her and Granddad had this after dinner nap. 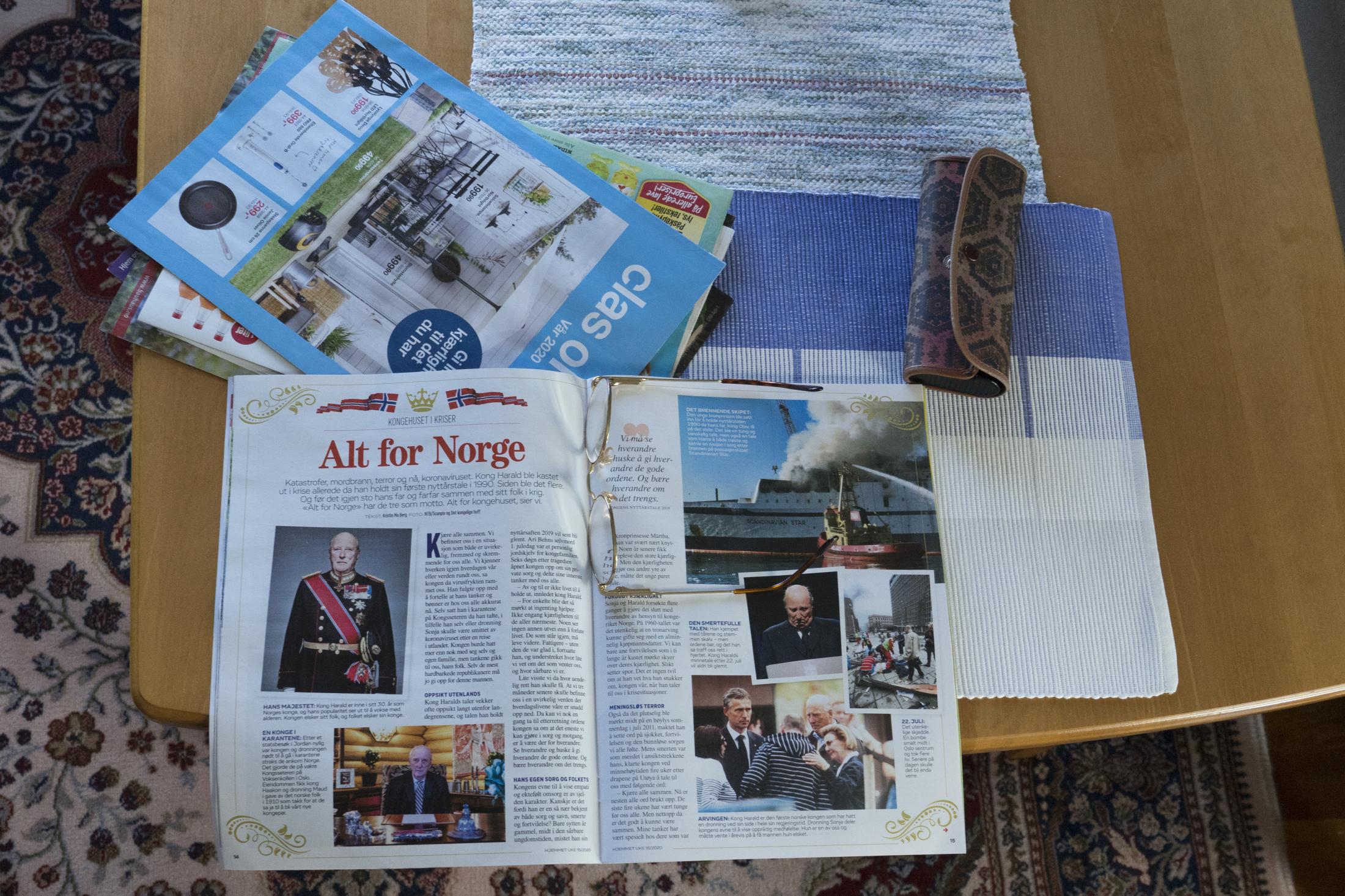 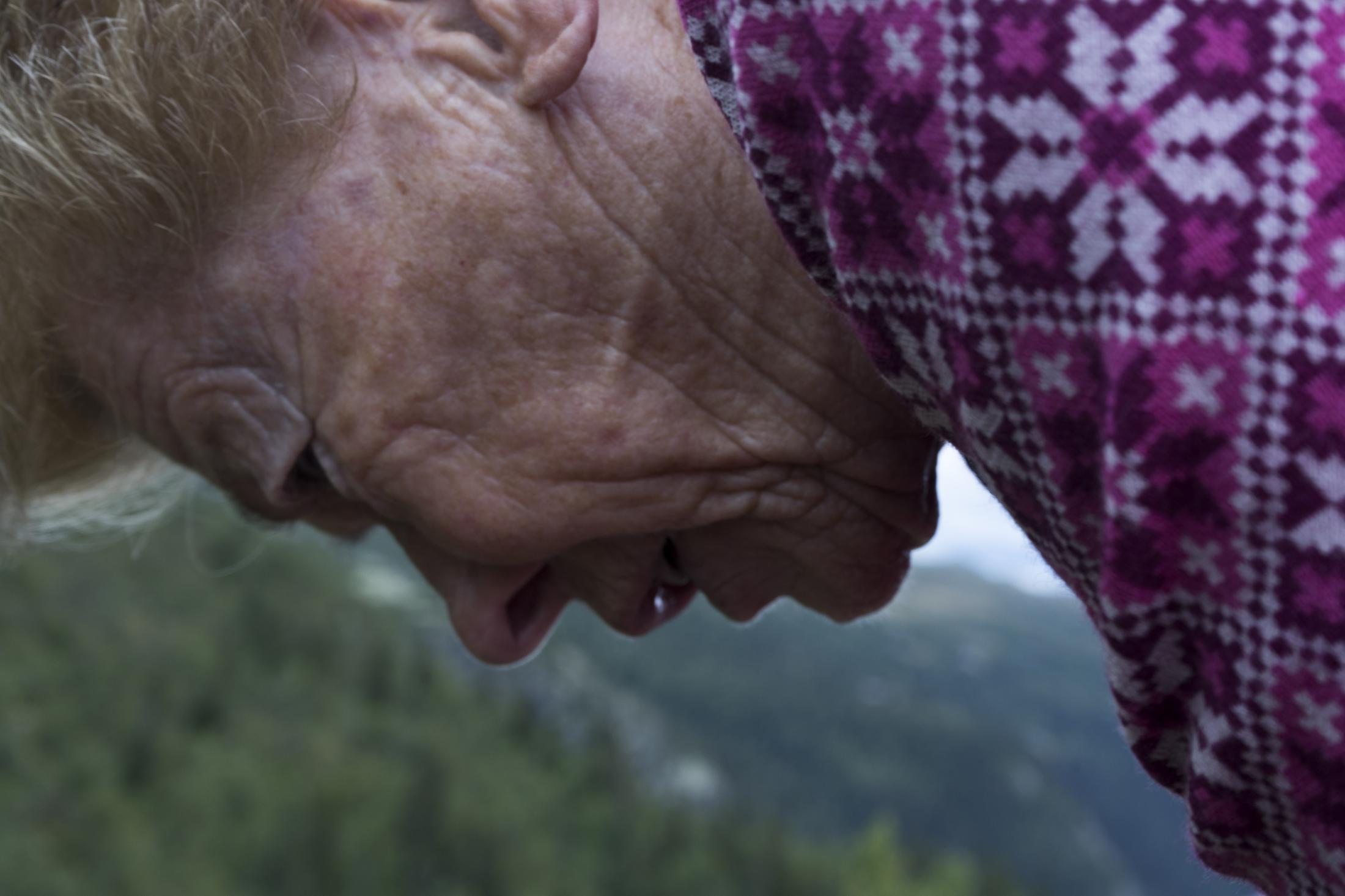 An earlier portrait of my Grandmother from a mountain trip we made last autumn. 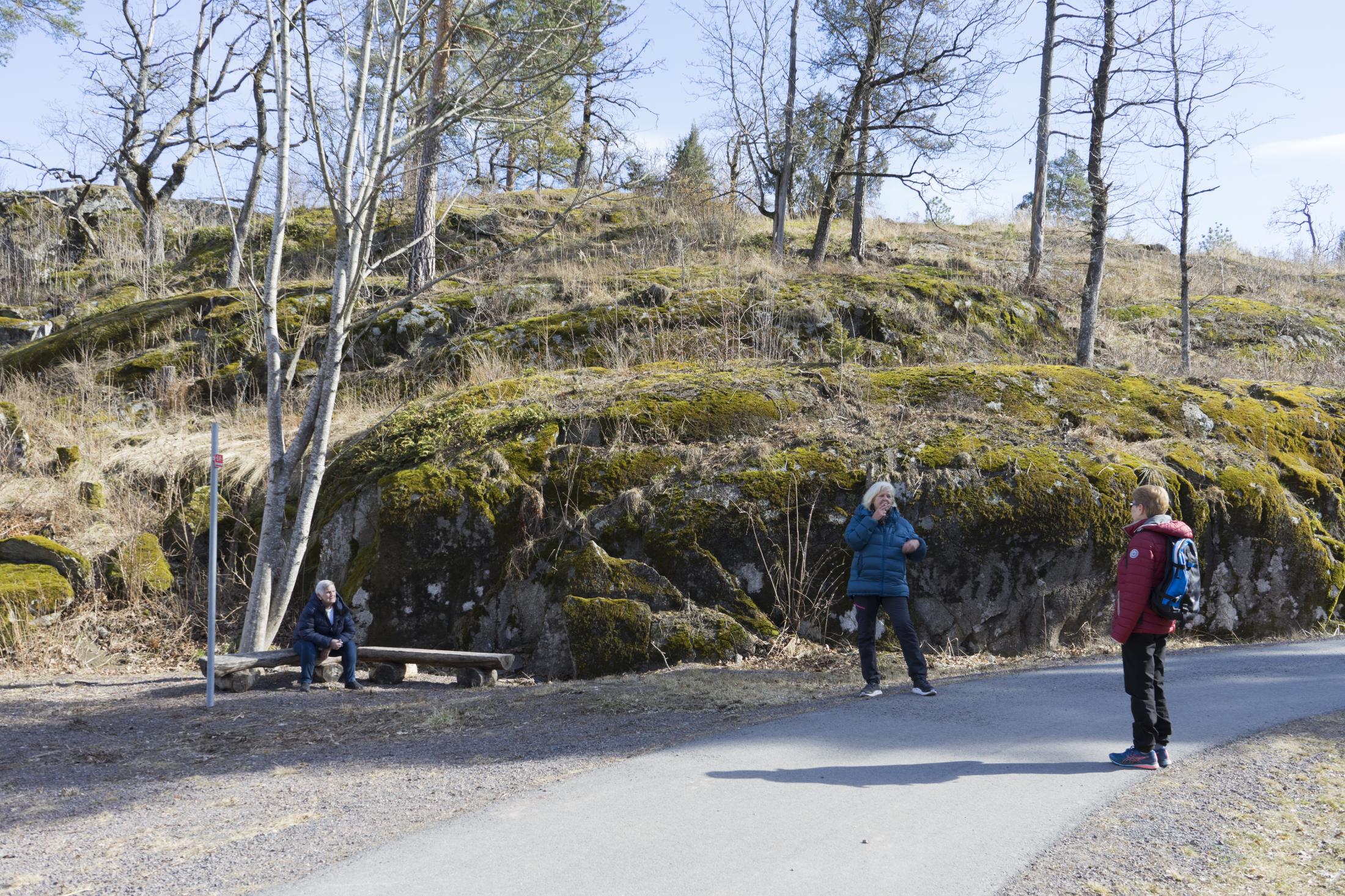 Grandma meets neighbors on a walk one afternoon. The obituary was printed in the local paper a couple of days prior and she explains what happened to the ladies who “Just saw him” walking the neighborhood. 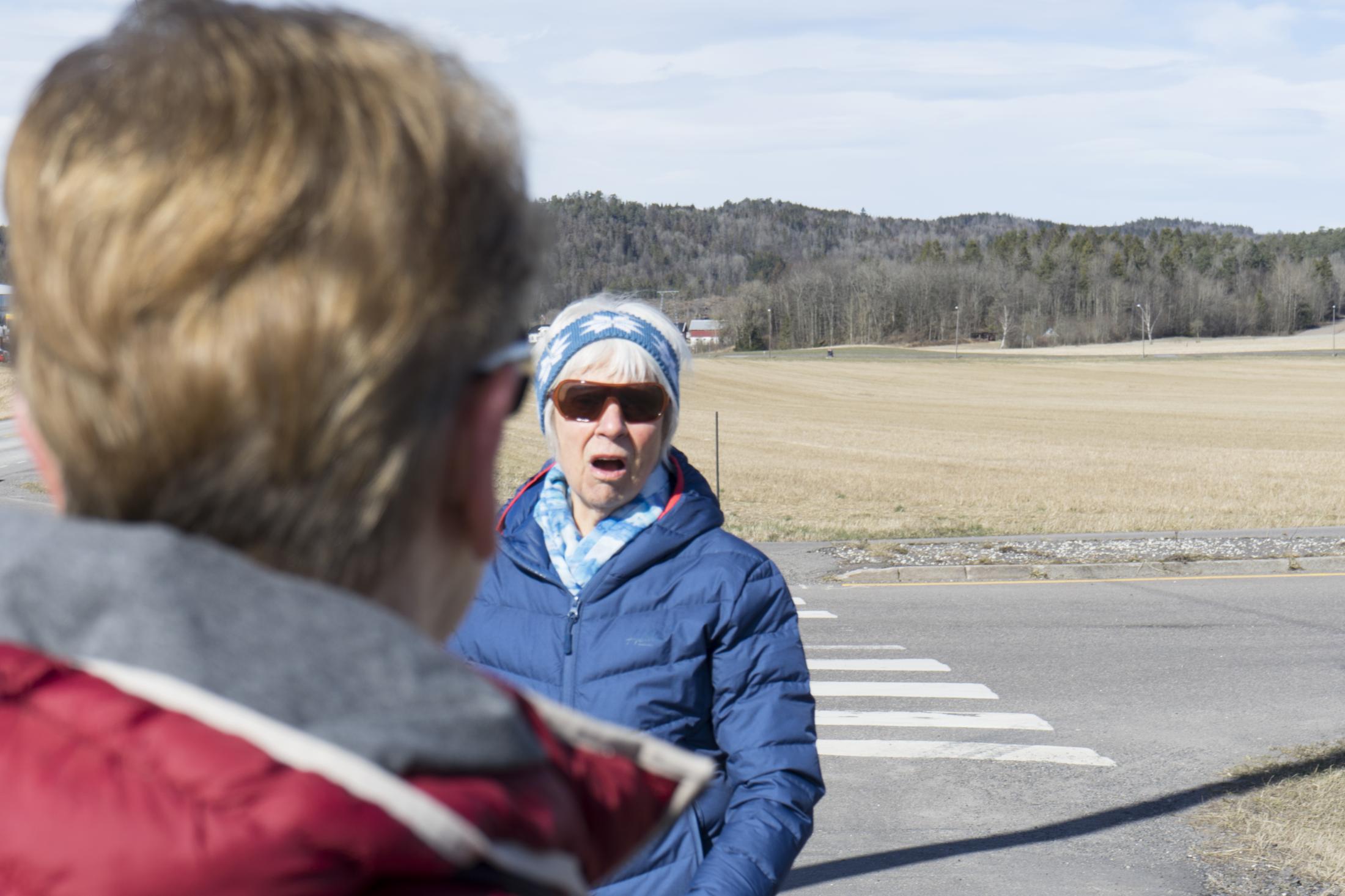 Grandma meets an acquaintance on a walk one afternoon. The obituary was printed in the local paper a couple of days prior and she explains what happened to the lady who “Just saw him” walking the neighborhood. 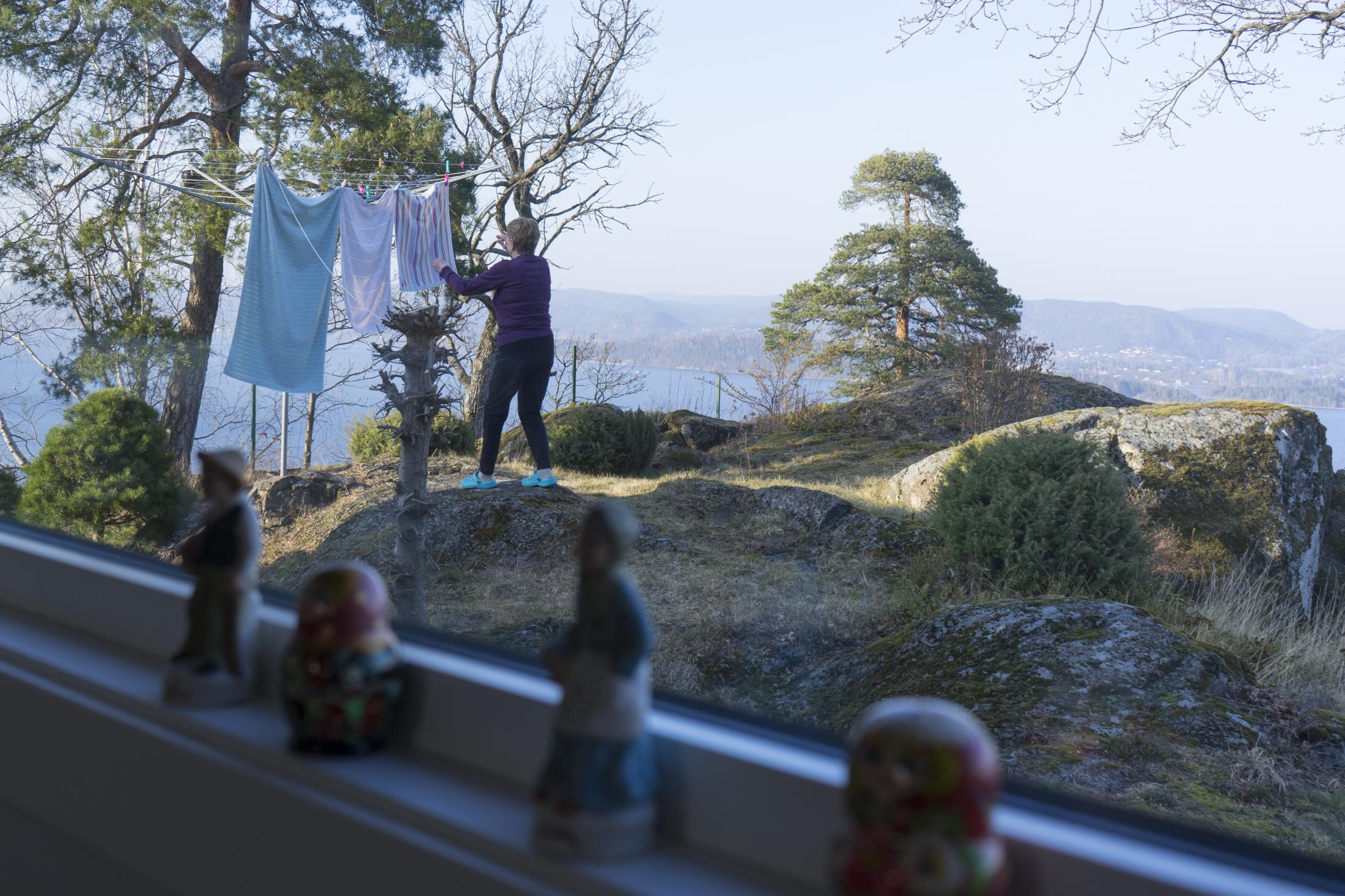 Grandma is taking in towels from the cloths line in the mountain garden. 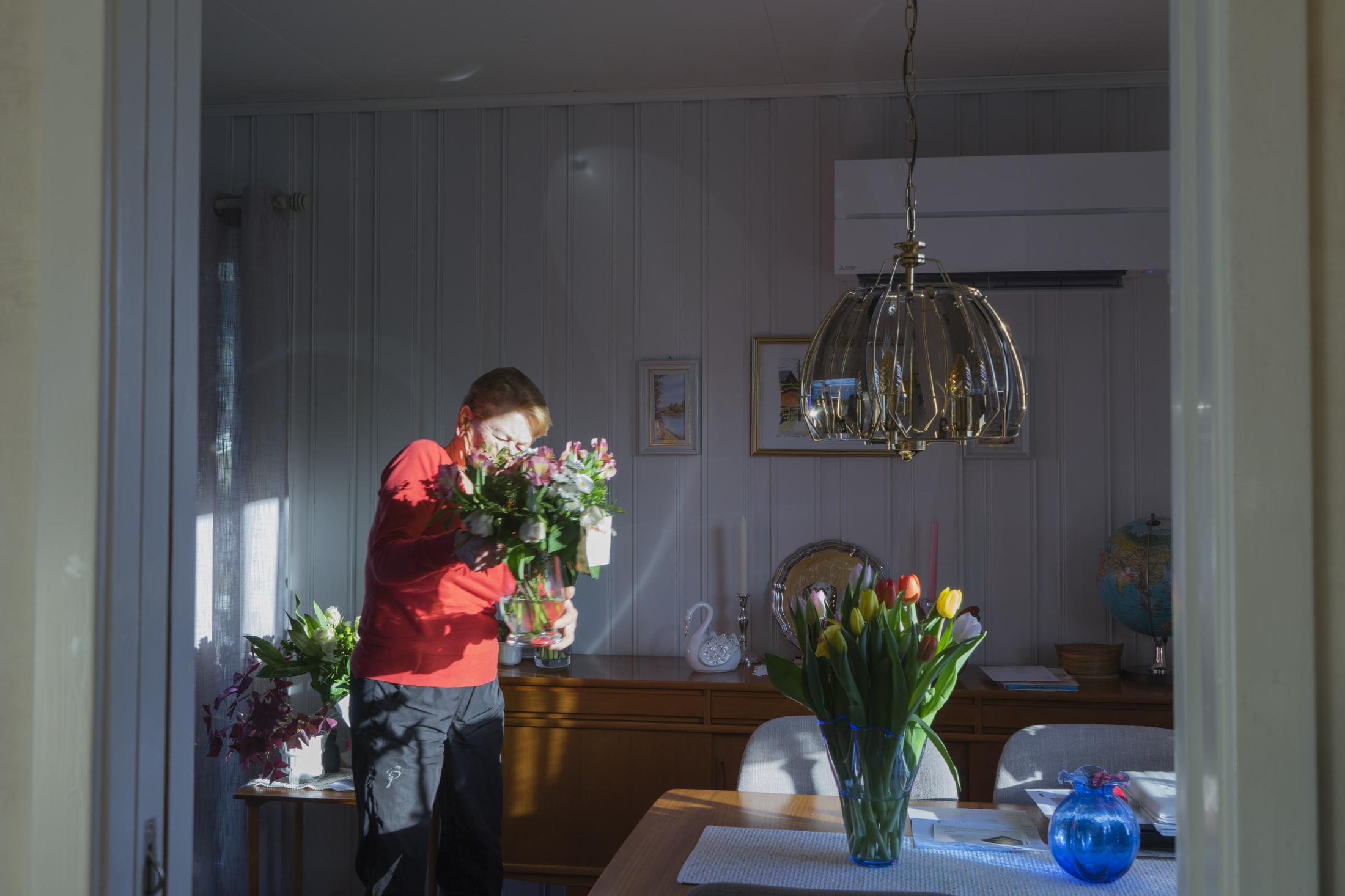 My Grandma expressed that she felt so uncomfortable with all the attention and flowers she received after Grandpas death. I tried to console her with the fact that he was a well-liked man and that people in the neighborhood loved him. She pointed out that, maybe this where peoples’ way of caring, when they couldn’t come to visit because of COVID-19. 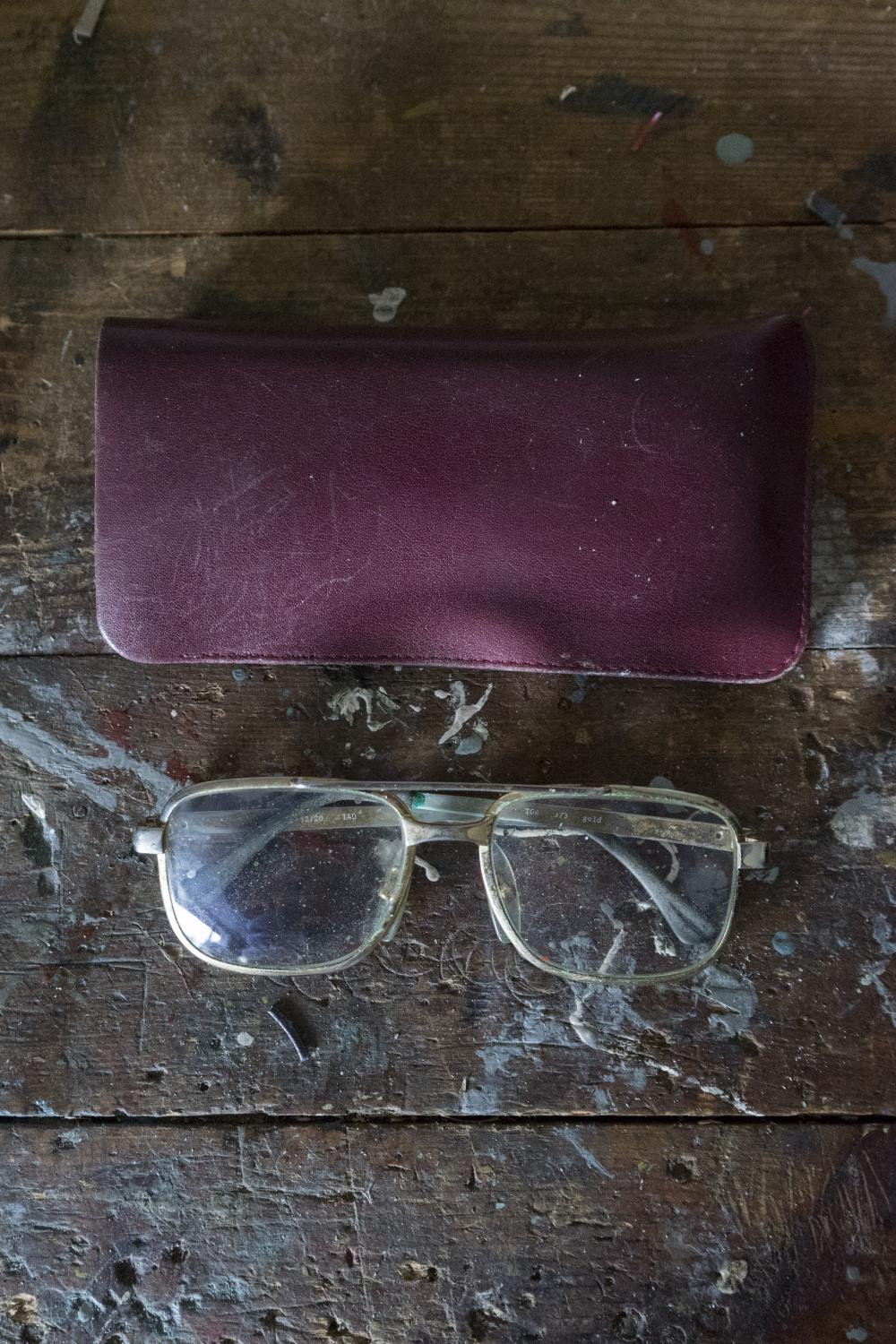 A pair of old 70s glasses is left behind in my Grandfathers toolshed. These were used only in here and had marks of paint and sawdust. 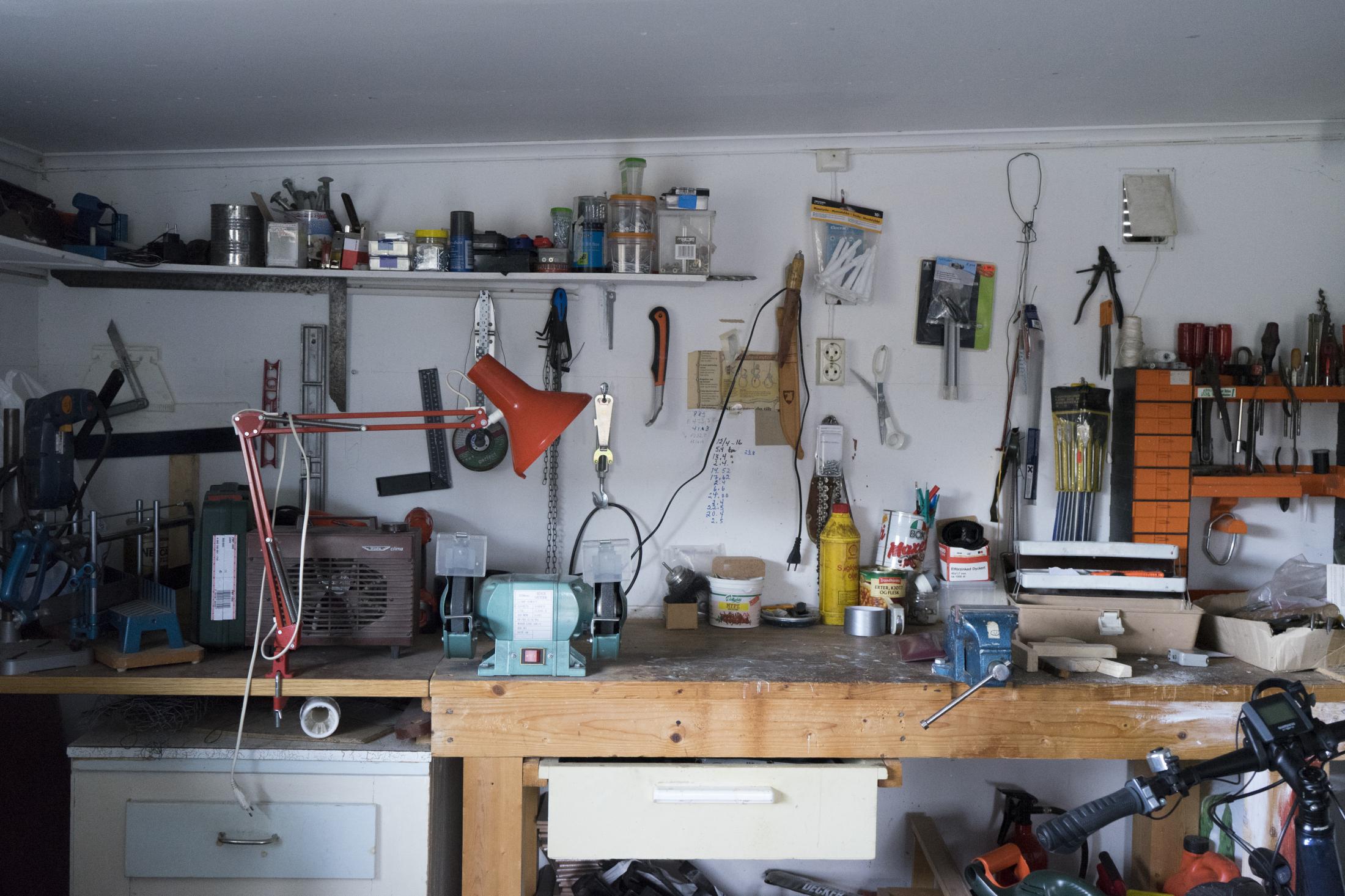 The only place in the house were one could see remnants of my Grandfather was his toolshed by the entrance door. It stood as a mausoleum of his life. He collected and saved everything he found and replaced and fixed whatever he could. 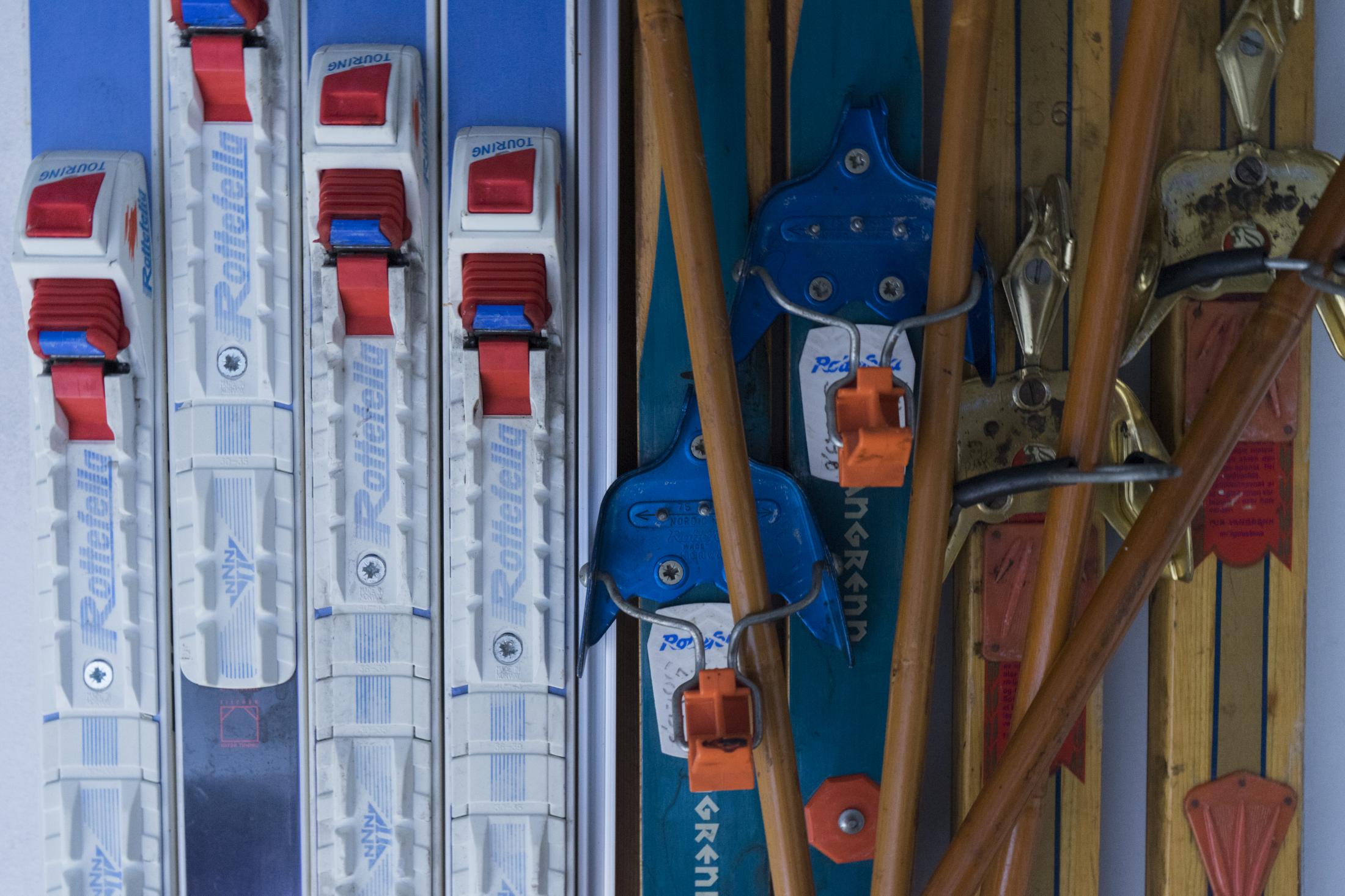 Grandad collected and saved all kinds of things in his toolshed. Like this collection of skis. From the older wooden version from his youth to the more modern plastic once I grew up with. 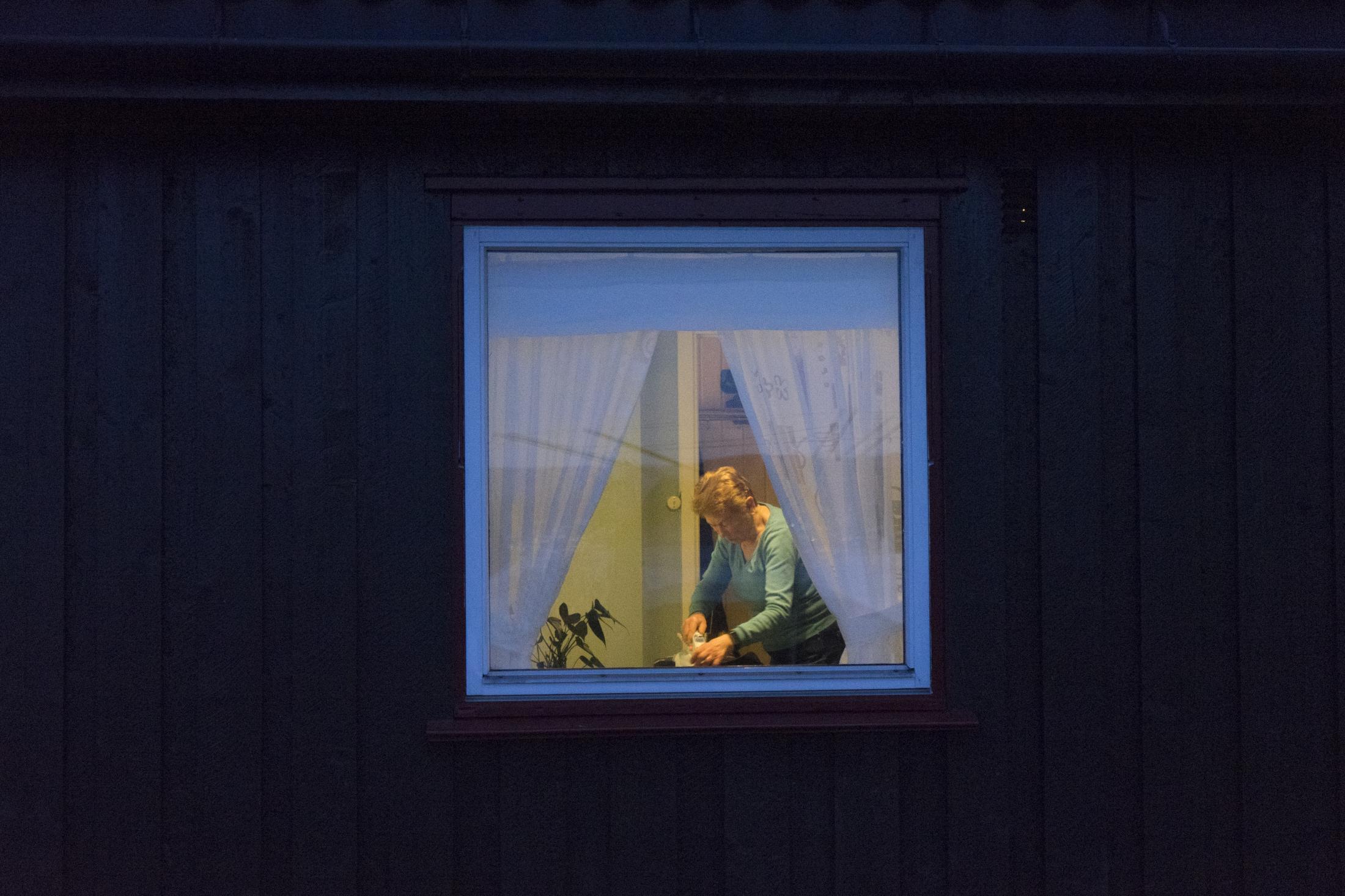 Grandma in the window, ironing our clothing for the funeral. She started preparing two nights before the funeral, she later confessed it was she did it because she dreaded the funeral since the day grandpa died.